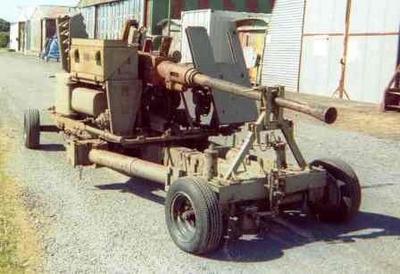 Description
Bofors Anti Aircraft Gun -MK12. World War II used mainly as anti-aircraft. Calibre 40 mm. Rate of fire - 120 rounds per minute. It is mounted on a 4-wheel carriage and has the designation of L60. Originally designed by the Swedish firm, Bofors, later fitted with British Bristol conversion kit for electric elevation and traverse. Usual name given to this weapon - Bofors/ACK gun.