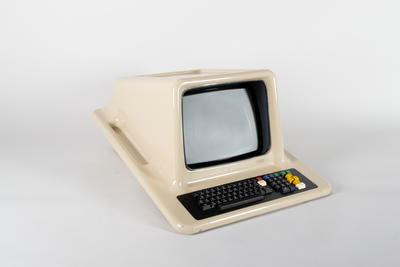 Description
Poly1 Computer 13", circa 1980. The computer and keyboard are enclosed in a cream coloured moulded plastic. There is a standard computer keyboard, black in colour with black keys and white characters on the tabs. There is a black plastic border around the screen. The brand name - POLY1 - can be seen on the bottom right hand corner front. There is an extension power cord on the back of the unit at the base.

Brief History
The Poly computer project began with Neil Scott and Paul Bryant, teachers in Electrical Engineering at Wellington Polytechnic in 1980, who saw a niche market for an educational computer and successfully pitched the concept to the Department of Education.

Polycorp was founded as a partnership between the government's Development Finance Corporation (DFC) and Lower Hutt-based software company, Progeni Computers Ltd. 50 working prototypes of the Poly1 were built in 8 months. The initial design work for the Poly was done at Wellington Polytechnic's Design School.

In late 1981 the Poly1 was market ready, however the Education Department's agreement to purchase 1,000 computers a year for 5 years fell over. While a number of Poly computers were still sold, including into the Australian and Chinese markets, the offer of a free Apple II to NZ schools, along with discounts on additional computers, effectively shut Polycorp out of the educational market here.

Polycorp wound up around 1990 after both the DFC and Progeni Computers became insolvent.