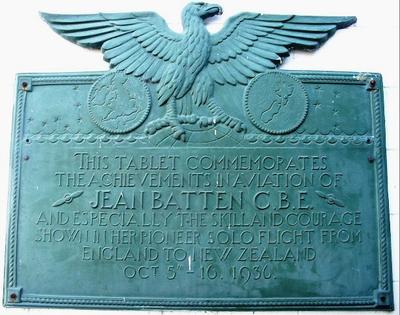 Description
Commemorative Tablet to the achievements of Jean Batten CBE in her pioneer flight from England to New Zealand, Oct 5 - 16th 1936.
The plaque appears to have been moulded in fibreglass or plastic. An eagle is depicted on the top of a stylised world globe. On the left hand side of the tablet is a map of the British Isles with the Northern Stars; and on the right side of the tablet is a map of New Zealand with the Southern Cross Stars. Two propellers flank Jean Batten's name. The colour of the tablet is green.