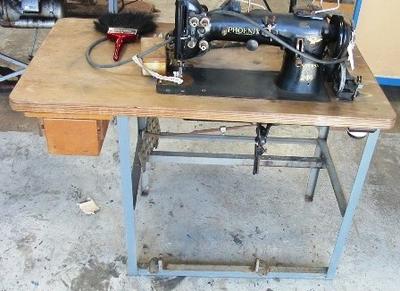 Description
Electric Phoenix Universal sewing machine. Machine is black painted cast iron with gold writing. The machine sits on the front right edge of a large ply board. The motor is beneath the ply platform, also the right. Platform sits on a metal frame that has been painted grey. Frame has four legs with support bars running between them. Machine has a long black plastic electrical cord with a tree pronged electrical plug at its end. In the far right back corner of the ply platform is a double pronged cast iron spool holder, a 'Y' shape, with two spools of white cotton thread. Both spools are a large, triangular shape. The ply table has two cut-out holes at the far right end of the sewing machine for electrical wires to go through. There is a single wooden slide draw to the far left corner, under the platform. Draw holds spools of cotton thread. The unit has a Hoover 230 volt motor attached to it.