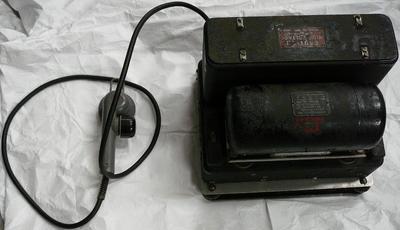 Description
Black coloured metal AM Speech modulator with attached microphone. Black coloured metal cylindrical Dynamotor on top, made by General Electric. Label on top stating CAUTION HIGH VOLTAGE. Blue coloured metal plate on side stating that model is MD-7/ARC-5 28 VOLTS DC NOs-74912 2280 CBY. Beside that is painted mark with US NAVY symbol and RELEASED 2-43. Was part of equipment which made up the AN/ARC-5 'Command Set'.
Microphone is no longer attached when item was inventoried 03/04/18.