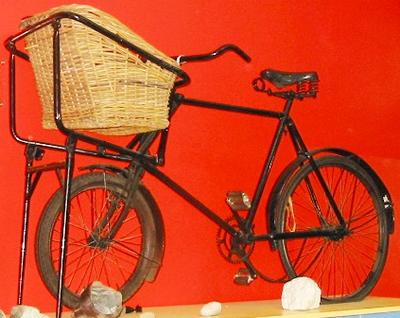 Description
A delivery bicycle. Dunlop seat with springs, and leather saddle. Single right brake (broken). Black rubber pedals. The front wheel is smaller than the rear wheel. Cross spoked. There is a basket and frame over the front wheel, used to store goods. The frame includes two poles which act as a bicycle stand.

Brief History
Delivery bicycles were advertised by manufacturers to help businesses develop a delivery service for their customers. This Hercules carrier cycle features a carry tray that is fixed to the bicycle frame, but separate from the handlebars, so that the bicycle can turn without the basket moving too. Other examples of these preserved carrier bicycles show use by butchers and grocers, though it is not known what this delivery bicycle was used for.

The Hercules brand was a British manufacturer which used imagery from Greek mythology to associate their bicycles with durability and strength.