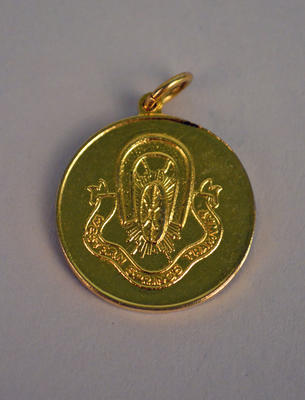 Description
A medallion made for the Western Springs Tramway which operates at MOTAT. The medallion is a circular, gold coloured token that depicts "WESTERN SPRINGS TRAMWAY" logo. The logo image shows a piece of moulded tram track above a tram wheel with banner below. Engraved on the back of the medallion is 'PASS' and 'G E Watt'.

Thanks for the comments. We will be able to add additional images of the collection in the near future. Thanks for your patience.

The Western Springs Tramway medallion was manufactured by Anthony "Jeep" Halling in his Jewelry, badge making and engraving business "Halling & Son" (Jeep was the son), which was located at MOTAT in the old Victorian shops in the 1980s and early 1990s.

What is the diameter in millimetres w/o the loop? Can you provide a photo of the reverse side of the medal?