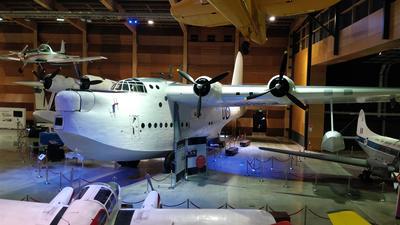 Description
Long range, maritime reconnaissance flying boat with a crew of 10. Power plant (MK V) four 1200 HP Pratt and Whitney R-1830-90 B twin Wasp 14 cylinder radial air-cooled engines. 4-engined monoplane. Built by Short Brothers at Belfast in 1945. The engines are driving 3-bladed Hamilton standard hydromatic full-feathering airscrews. Wings - highwing cantilever monoplane. As on the "Empire" boat, the main wing structure consists of 4 extruded T-sections which form the corners of a box girder. These are braced in the lift bays by tubular struts, and in the drag bays by built-up members.
Hull - the frames are of channel section, interconnected by Z-section stiffeners. Sheeting is riveted on longitudinally with countersunk rivets.
The unit - cantiliver monoplane type. Fin and tail plane, metal covered. The moveable surfaces are fabric-covered aft of the leading edge and have inset trimming tabs.
Accommodation - the hull is divided into 2 decks - on the upper deck there is forward, the control cabin accommodating 2 pilots side by side, a radio operator, a navigator and an engineer. Aft of the spar frames are the reconnaissance flares and stowage.

MOTAT’s Sunderland is one of the rarest aircraft in the collection. It is one of four remaining in the world and the only example in New Zealand.

This Sunderland was one of sixteen that were brought to New Zealand after World War II for the Royal New Zealand Air Force. Most of its service was with 5 Squadron at Laucala Bay in Fiji, but it also served with the Maritime Conversion Unit at Hobsonville.

The Sunderlands were much loved and appreciated in the Pacific for the search and rescue and mercy missions they carried out. This included anything from searching for missing fishermen, survivors from aircraft wrecks or missing vessels. They also dropped off emergency medical equipment and picked up sick or injured people and took them to hospital.

The Sunderlands were replaced by Orions in 1966 when NZ4115 was withdrawn from service and donated to MOTAT. It was ferried to its present site at MOTAT and reassembled by the RNZAF during February/March 1967.