A Polarising Sauce: The Essence of Anchovies 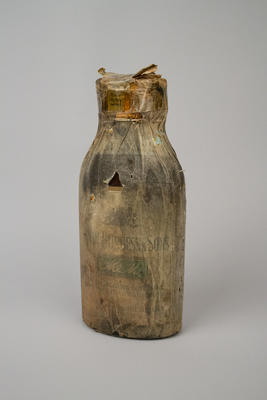 In 2017, MOTAT received the donation of an unopened bottle of sauce carrying the title “Essence of Anchovies”. At first it may seem an unusual object for a Museum of Transport and Technology (MOTAT) to hold within their collection so let’s take a closer look at the unique history of this object.
Anchovy essence is a brown or pink, thick, oily sauce consisting of pounded anchovies, spices, such as black or cayenne pepper and/or nutmeg, butter and sometimes wine. It was commonly used to flavour soups or meals.

These labels gave us the name of the manufacturer, John Burgess and Son. John Burgess opened his own business at 101 The Strand in 1760. John was a self-described “oilman” meaning he specialised in trading Italian foods and products such as olive oil. By 1779 he had moved his premises to 107 The Strand.

The Essence of Anchovies sauce was debuted by John Burgess’ company in 1775 and from there it became the first branded sauce to earn a nationwide reputation in Britain, earning it the status of a household staple. The sauce’s popularity was evident through a range of events: such as Admiral Nelson’s HMS Victory carrying it amongst their supplies in 1805, Lord Byron mentioning the sauce in his poem Beppo written in 1817, Novelist Walter Scott claiming Burgess’s fish sauce was the best in 1823, and the company being appointed the official purveyors to George V in 1911. John Burgess & Son also won awards at the 1867 Paris Exhibition and 1873 London International Exhibition for both its fish pastes and pickles. The sauce inspired numerous imitations in the following decades.

After it’s manufacture in London, MOTAT’s bottle, our bottle is presumed to have made the trip to Antarctica with Robert Falcon Scott (1866-1912), a British naval officer and explorer, on the ship Terra Nova. Captain Scott led the British Antarctic (Terra Nova) Expedition in 1910-1913 with the intention to study the Ross Sea area and be the first to reach the South Pole. The Terra Nova departed London on 1st June 1910 and made stops in Cape Town, Melbourne, Lyttleton and Port Chalmers (New Zealand) before reaching Ross Island in January 1911. At every stop along their journey the Terra Nova collected supplies and equipment and, if not in London, then one of these locations would have been where the anchovy sauce was collected. Aboard the ship they also had several prefabricated buildings that were going to become their Antarctic Base during the expedition.

Some of the first tasks of the expedition were to unload the ship and establish their base. Construction was completed within nine days at Cape Evans, on Ross Island, and led to the establishment of, what is now known as, Scott’s Hut or the Terra Nova Hut. A detailed description of the Hut and its construction can be found on the Antarctic Heritage Trust’s website (https://nzaht.org/conserve/explorer-bases/scotts-hut-cape-evans/history-of-scotts-expedition/).

The bottled supplies, still crated, were unloaded from the Terra Nova and then used within the Hut to create a bulkhead to divide and define the wardroom, for the officers and scientists, from the messdeck, for the rest of the men. Those that were not in crates were stored on the open shelving within the kitchen, as can be seen in these images from the Antarctica New Zealand image catalogue (https://antarctica.recollect.co.nz/).

The expedition was very successful in the scientific study of Antarctica. Managing to collect specimens from 2109 different animals (401 of these were previously unknown) and plant fossils; as well as, surveying the terrain; studying the geology; the formation of glaciers and land surfaces, observing earths magnetism and atmospheric electricity; collecting weather data; as well as making a second ascent of Mt Erebus. Scott and four members of his team also made the journey to the South Pole only to find the Roald Amundsen’s team had beaten theirs by a week. It was during the return journey that all five members of the team perished due to cold and starvation in March of 1912. The rest of the expedition continued their work in Antarctica until 18th January 1913 when they were collected by the Terra Nova and the Hut was closed. Lieutenant Evans noted upon their departure “We have left at Cape Evans an outfit and stores that would see a dozen resourceful men through one summer and winter at least.”  There are many articles and books that go into detail when it comes to fate of Captain Scott and his Terra Nova expedition, but we shall follow the journey of MOTAT’s bottle at Scott Hut, Cape Evans.

In January 1915 Sir Ernest Shackleton’s Imperial Trans-Antarctic Expedition visited Scott Hut. First Officer Stenhouse completed an inventory of all the stores that remained at the hut, while other members of the expedition found a message left by Scott’s expedition, discarded clothing and equipment. Many supplies, useful items and mementoes were taken back to the ship. The expedition returned to the Hut at Cape Evans in June 1915 and continued to return on and off until their rescue in January 1917 whereupon the Hut was again closed.

The next time Scott’s Hut was visited was during the 1955-1958 Commonwealth Trans-Antarctic Expedition (TAE) by New Zealand’s icon, Sir Edmund Hillary and his team. The TAE expedition was led by Dr Vivian Fuchs and aimed to cross the Antarctic continent from the Weddell Sea conducting research along the journey. Hillary was brought on to the expedition to support Dr Fuch’s British team and led the New Zealand team. The New Zealand Government sponsored the expeditions construction of Hut ‘A’ - the original building that defined the establishment of New Zealand’s Scott Base at Pram Point. During the TAE expedition Hillary’s team was responsible for laying food and fuel depots for Dr Fuchs’ team. Hillary, Murray Ellis, Peter Mulgrew, Jim Bates and Derek Wright formed the team that were the first group to reach the South Pole, on the 4th January 1958, since Sir Robert Falcon Scott, although Hillary’s team used Fergusson tractors.

It’s these Fergusson Tractors that connect MOTAT to the story of MOTAT’s Anchovy Sauce. Donated by the distributors C.B. Norwood in 1964, who also supplied the tractors for the New Zealand party, the Fergusson Tractor in the MOTAT Collection is one of three that were used by Hillary’s team to make their journey to the pole. The presence of this tractor within the collection led to the donation of the Derek Wright Collection. Derek Wright was a part of the New Zealand team on the TAE expedition and one of the five men to reach the South Pole. A National Film Unit veteran, Wright was responsible for filming Hillary’s support crew’s contributions to the expedition and to help drive the tractors. While on the expedition Wright and others from the New Zealand party visited Scott’s Hut and this is when Wright obtained his bottle of anchovy sauce as a memento. The bottle then travelled home with him in 1958 and was stored with all his other TAE expedition gear until it’s donation to MOTAT in 2017. Along with the bottle the collection contains sleeping bags, personal clothing and footwear, all used during the expedition, and a photo of the five-man team at Depot 700.

Ultimately, this innocuous bottle of sauce has an unusual history. Making its way from London and eventually landing in Antarctica, the Essence of Anchovies witnessed three of the major expeditions that occurred within Antarctica’s history.  With the addition of the Fergusson tractor and other supporting objects, this bottle tells a tale relevant to New Zealand’s transport and technology, therefore making it an essential bottle of sauce within the MOTAT Collection. Estimated to be at least 110 years old, this bottle of Essence of Anchovies is not looking too bad for its age, is it!

Citation
McAlpine, Christen. 2020. A Polarising Sauce: The Essence of Anchovies. New Zealand: The Museum of Transport and Technology (MOTAT).

A Polarising Sauce: The Essence of Anchovies 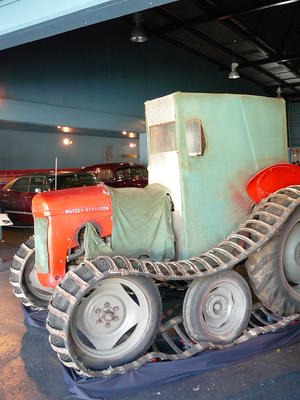