A Platform for the Future: Auckland Rapid Transit 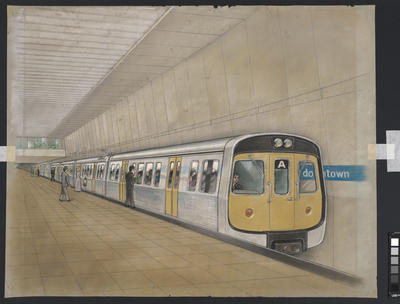 The ART scheme
The Auckland Rapid Transit (ART) scheme was an electric railway proposed for the city which included an underground loop in the central business district, with two main stations and a third planned on Karangahape Road. The underground system had above-ground sections further out, with stations connected to bus stops and parking for cars. The plan also included possible extensions to Auckland Airport and the North Shore.

The scheme dates back to 1969 when a Steering Committee was formed to investigate options for an integrated bus and rapid rail solution for Auckland. Nicknamed “Robbie’s Rapid Rail” after Auckland’s Mayor Dove-Myer Robinson, it was to have high service level and be, first and foremost, reliable. The scheme was to be funded by central government, but was ultimately cancelled with the Muldoon Government in 1975.

Fast-forward to 2017, when the Walsh Memorial Library was donated significant pastel and gouache renderings and project reports from Richard Croker, one of the engineers on this scheme. The Library saw how topical this collection was — especially when you consider rising carbon emissions and the City Rail Link currently under construction in Auckland. There was synergy with the original proposal which took into consideration pollution, dropping public transport use and rising car ownership by Aucklanders.

The link between this context and the issues discussed today also became increasingly apparent to our Exhibition Curator, Rachel Bush. It was decided these renderings were a timely way to exhibit and encourage discussion around Auckland’s public transport or “what could have been” (a quote from many of the exhibition visitors.)

However, after four decades in storage, the artwork required delicate conservation treatment by MOTAT’s Conservation team with the help of Auckland Art Gallery’s paper conservator. Between these teams, the renderings were removed from their foxed, acidic mounts. Using the Japanese hinge method, they were rehoused onto acid free foam board. Further cleaning and stabilization work was carried out so they could be photographed to create surrogates for display.

Identifying the maker
The original rendering on the right showing train 124 is the only one to feature the maker’s initials with “A.G.J. July ’74.” This particular rendering was instrumental in figuring out who had created these renderings, which initially eluded both the donor and the Library.

After some research, a documentary was found on Ngā Taonga Sound & Vision’s collections online. It was made by the New Zealand Railways about the project and featured New Zealand’s celebrated industrial designer, Gifford Jackson. Documentary stills showed Jackson working on several of the renderings held by the Library. There was our answer!

Clearly, ART was a vision for a more sustainable future and a way to combat the city’s public transport woes considered a nightmare even in the 1970s.

A Platform for the Future: Auckland Rapid Transit 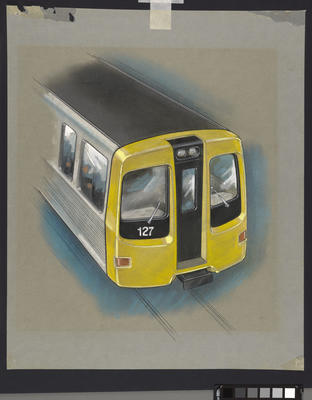 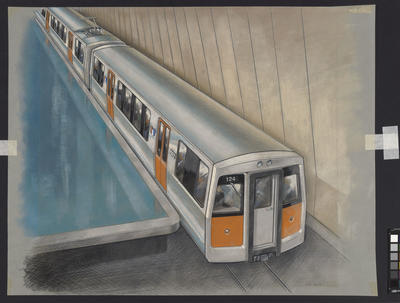