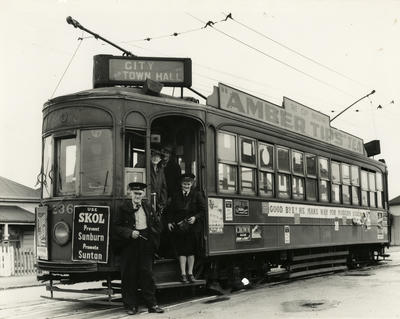 Women were employed as conductors on Auckland’s trams because of the Second World War. As a result of civilian manpower, introduced in January 1942, workers could be directed to essential industries, such as butter and cheese factories, freezing works and mines. Tramways were added to the list in March 1942 but not conductors until June that year. During the war, male staff were leaving the Auckland Transport Board’s tramways to volunteer for military service, or later were conscripted.

Women were also manpowered and began to work in places which previously had been male-only occupations. Tram conductor was one of these occupations. Thanks to a strong union, women conductors were paid the same as men — a unique early example of equal pay for equal work.

On 14 April 1942 the Auckland Transport Board announced that it would employ women, and training began in early June. The first woman began work on Monday 8 June, the Auckland Star reported. ‘They were in the charge of experienced men, whose duty consisted or overseeing the work of the novitiates. This will continue for a day or two, when it is considered the new conductors will be able to manage without further assistance.’ (Auckland Star, 8 June 1942, p.6)

MOTAT’s Walsh Memorial Library has some interviews with women who worked as tram conductors in Auckland. The women recall the training they had at Auckland’s Gaunt Street Depot and the actual work of a conductor — taking fares and dealing with passengers, changing the poles — along with social club activities.
Phyllis Harwood worked as a conductor from 1947–56. In her interview she explained that she needed a medical examination and a character reference before being accepted. ‘You had to have someone to vouch for you — that you were honest.’

There were twenty-one in her group of trainee conductors. The instructor showed them ‘how to pull the pole down and how to turn the seats’ and they had to learn where the sections ended and began and what fares to take, as well as the main roads that passengers might mention when asking for a ticket. They then went out on a tram with another conductor to put their learning into practice. ‘I think it was a week and then you were on your own.’

Phyllis had some good stories to tell about dealing with difficult passengers. She recalled the time she kicked a man: ‘I got to the top of Parnell Rise where all the pubs are, and I had exactly one man standing, and all the rest had a seat. I started taking [fares]. When I got to the middle, he wouldn’t move. He wouldn’t let me past. I said, ‘Can I get past, please.’ No. He just looked the other way. All the other men tittered. I said, ‘If you don’t let me past, I’ll just have to push past.’ I pushed past but as I did, he reached his foot up and kicked me in the leg with his heel. … As soon as he did it, I said, ‘You’ve kicked me,’ but he pretended he didn’t and looked the other way. All the men knew and had seen it. So I said, ‘Where would you like it?’ He didn’t answer so I [said], ‘I’ll give it to you where you gave it to me,’ and I kicked him in the shin. And there wasn’t a word. That’s the worst one that I ever had. … All the men were watching to see what would happen and I thought, I’m not going to back pedal.’
Mostly, though, Phyllis enjoyed the work and the comradeship with other conductresses and with the motormen who drove the trams. 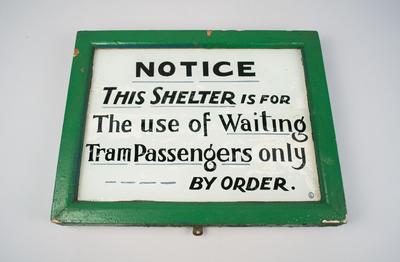 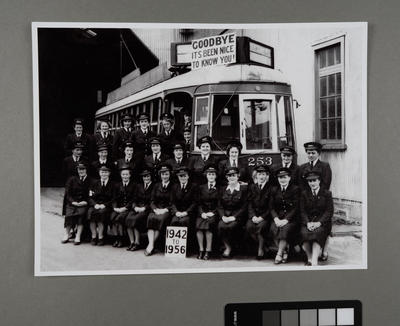